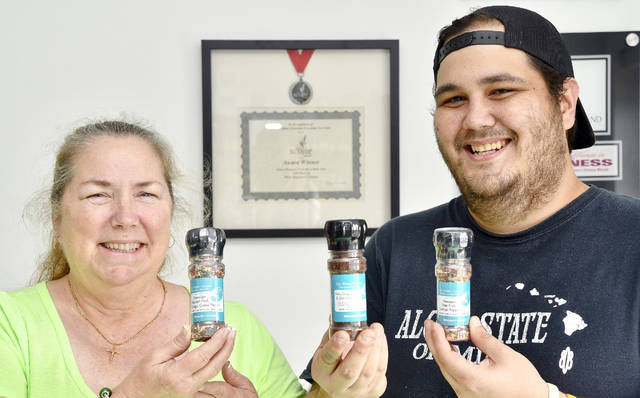 HANAPEPE — When the steak rub was conceived, it did not have any dragon fruit, said Sean Cristobal, the mix master at Salty Wahine Gourmet Hawaiian Sea Salts. “I tried using dragon fruit, one day,” said the producer of Fiery Dragon Fruit & Java Steak Rub. “It produced a good aroma, and made everything smooth. It’s also a good play on words — you know, ‘Fiery Dragon’ — and dragon fruit is one of the superfoods.” The new mixture earned second-place honors at the 2017 Scovie Awards in Arizona, described as the world’s most competitive fiery foods contest. The 2017 Scovie Awards judging panel of about 90 culinary experts honored Salty Wahine Gourmet Hawaiian Sea Salts in the Unique category with a second-place honor. The product was applauded because of its well-balanced flavors, nice heat, and unique ingredients. The Scovie Awards evolved from the National Fiery Foods & Barbeque Show in 1996 when the event was called The Fiery Foods Challenge. The Scovie Awards was named to honor the memory of Wilbur Scoville, the scientist who invented the Scoville Organoleptic Test in 1912 to determine the heat scale of chili peppers. First place in the Unique category was awarded to Pepper Pot of Key West Mild Tamarind Sauce submitted by Pepper Pot Caribbean Foods, and third place was awarded to CRC BBQ Riley’s Sweet Pecan submitted by CRC BBQ. 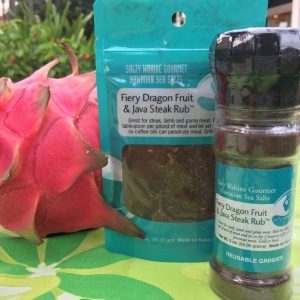 The Fiery Dragon Fruit Java Steak Rub includes Dragon Fruit infused Hawaiian salt, Kauai Coffee, and chili pepper. “His brain is better than mine,” said Laura Cristobal Andersland, owner of Salty Wahine and Sean’s mother. “I think he created this to show up my Mango Java that I created.” The Fiery Dragon Fruit Java Steak Rub is one of several new offerings unveiled by Andersland at its Hanapepe outlet and kitchens, the others being salt free Hawaiian Star Fruit Lemon Pepper, and Hawaiian Passion Fruit, Orange, Guava Pepper. “These products have been tested over the past six months by customers and family members before being released,” Andersland said. “We get comments on the products’ taste and other qualities before getting it out.” The Fiery Dragon Fruit and Java Steak Rub, and the other two new mixes are available at the Hanapepe outlet located around the corner from the MCS restaurant. The Anderslands are in the process of having the new products worked into its outlet base of more than 100 locations throughout the state.