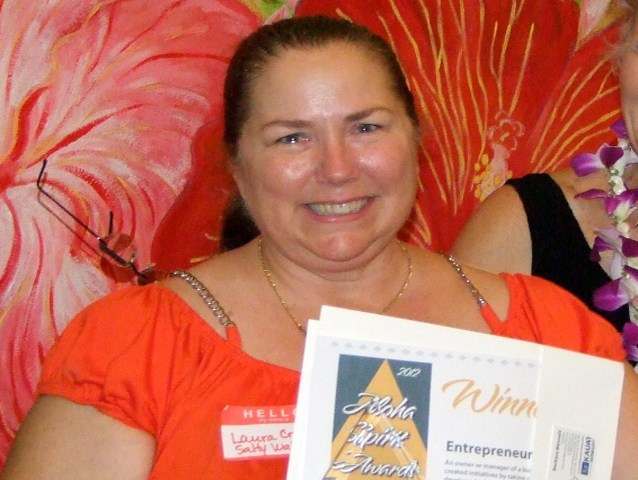 Laura Cristobal, the owner of Salty Wahine, accepts her Aloha Spirit Award in the category of Entrepreneur during the Aloha Spirit Awards and 1st Anniversary Celebration of For Kauai. Photo by Anne E. O’Malley

After retiring from a 30-year career with Budget Rent-A-Car, Laura Cristobal faced the big question: what now?
The answer turned out to be Salty Wahine, a line of Kaua`i-made gourmet sea salts that she’s parlayed into a highly successful business.
“It went global in just three years,” she says. “I still pinch myself every day.”
Still, she says, “it didn’t happen overnight. It took a lot of hard work to get to this place.” Cristobal whipped up her first batch of seasonings at age 11 when she prepared spaghetti for her family “and they’ve made me cook ever since,” she says with a laugh. She named that initial creation the Hawaiian Rub, and it’s now her best-seller. Cristobal invented another three varieties over the years, and then expanded to 16 flavors once she decides to launch her business. Now her line includes such taste tantalizing blends as mango java blend, passion fruit chili pepper, pineapple poultry, guava garlic, and kiawe kick. She also offers cane sugar flavored with coconut or lilikoi. “I did a lot of product development in the first year,” she says. ”I talked to chefs about what they want, which is why I have the exotic ones.”
Cristobal also worked hard on the nuts and bolts of putting together a solid company. “I take a lot of classes through the SBA [Small Business Administration] so then I take what I learn and I put it to use.”

She sought advice from her sister, Lori Cardenas, who founded the Aunty Lilikoi line of Kauai-made passion fruit products. “I picked her brain because she’s been very successful,” says Cristobal, who gained useful business management skills while working in her mother’s bookkeeping and tax preparation company. Her nephew proved handy, too. “We were having a family vote on the name and he threw Salty Wahine out there. I thought, hmmm, that’s the one.” “I have good marketing skills and network pretty well,” she says. “I love to wala`au and talk to everyone.”
Cristobal also found value in participating in the Chamber of Commerce and other local business initiatives. “I’m a big supporter of Kaua`i Made and Kaua`i grown products,” says Cristobal, who was recently named the winner in the entrepreneur category of the Aloha Spirit Awards sponsored by For Kaua`i.
Laura Cristobal with her Salty Wahine Gourmet Hawaiian Sea Salts. Photo by Anne E. O’Malley

With the business on solid footing, Cristobal is looking to expand. Her products are already in the Navy Exchange on Oahu, and she’s meeting with the American Logistics Association this year to see if she can get the Salty Wahine line in commissaries and exchanges worldwide. “I really want to provide our military personnel with some quality seasonings,” she says. “I love our military.”
She believes her expansion plans will be supported by plans to open a 3,200-square-foot facility in Hanapepe that will allow her to put a retail store, office space, factory and commercial kitchen under one roof. Currently, her operations are spread between several locations, which hampers efficiency. If all goes according to schedule, Salty Wahine will move into its new digs in June.
Cristobal plans to allow other businesses to rent her commercial kitchen “so they can grow, too. If it wasn’t for all the people helping me, I wouldn’t have been able to do what I did.”
Among those helping the most are her staff: Shawn Valmoka, Megan Rasay, Kendall Andersland, Lynn Carvalho, Katie Johnson, David Andersland, Bernadette Terry and Harry Soares.  Salty Wahine had just one employee the first year, and Cristobal says she’s been thrilled to provide an additional seven workers with jobs. “I love that part of it, and seeing their excitement about the business growing.”