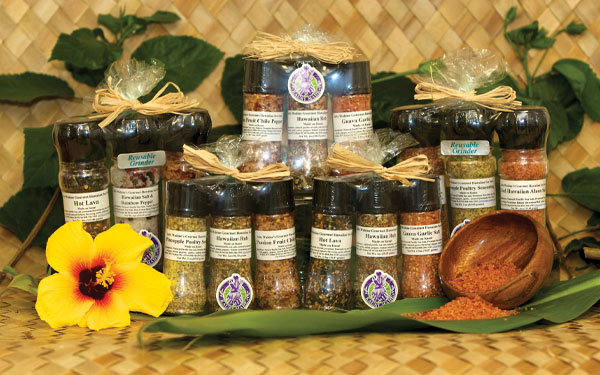 I caught up with Laura Cristobal, owner of Salty Wahine Gourmet Hawaiian Sea Salts, at the bustling Tip Top Cafe in Lihu’e. Seated comfortably at a booth, I order a rich oxtail soup and Cristobal orders a Portuguese omelet.

“I made my first version of Hawaiian Rub when I was 11 years old,” she says. “We lived right up the street from here. I called it the Fab-5 at first because it had oregano, basil, parsley, Hawaiian salt and paprika.”
Cristobal has perfected her blend since then and chefs, including one at the Grand Hyatt Waikiki, use it in their dishes.
“My boyfriend David and I went to New York for a vacation,” she recalls. “We were eating at the Grand Hyatt Park Avenue, and I read ‘Black Lava’ on the menu. I have that name trademarked, so I talked to the chef and found out he got it from Chef Jeff at the Grand Hyatt Waikiki.”

There are 11 varieties in her line of handcrafted, gourmet Hawaiian sea salt blends, seasonings and rubs. Cristobal makes Black Lava ($8) by smoking sea salt over hickory before blending it with activated charcoal. Activated charcoal is used to reduce gas, lower cholesterol, treat poisoning and prevent hangovers. Hmm … that sounds like a good Margarita salt rim!
If you like it smoky and spicy, the Hot Lava is Black Lava with garlic and Hawaiian chili peppers mixed in. “We get our garlic from Gilroy, Calif.,” explains Cristobal, of the town that hosts the Gilroy Garlic Festival. Founded in 1979, it’s one of the largest food festivals in the U.S.

“We have six products with Gilroy garlic, and we’re hoping to attend the festival next year,” Cristobal says. “There’s a big difference between buying dried garlic and getting it from Gilroy. Their garlic has more flavor and it smells great!”Hawaiian Rub, the bestseller, is studded with chunky salt, large flecks of fresh herbs, cubes of roasted garlic and bits of onion. You can use it on everything – pasta, eggs, steamed vegetables and soups – but we like it on grilled chicken.

Kiawe Smoke looks like smoky topaz jewels and takes five days to make. The process involves smoking the salt over mesquite coals so that each grain gets a thick coating of smoke. “We take a 5-pound pork butt and score it,” says Cristobal, explaining how to make her Crock Pot Kalua Pork. “Then I sprinkle a palm full of Kiawe Smoke over it and let it go.”
Other flavors include Guava Garlic, Pineapple Poultry, Passion Fruit Chili Pepper, Red Alaea Salt, White Hawaiian Salt and Mango Java.
“I make the Mango Java with Kaua’i Coffee,” says Cristobal. “It’s amazing what coffee does to red meat. We rub it on chuck steak and let it marinate at room temperature for 90 minutes. It’s a natural tenderizer and practically turns it into filet mignon, and the mango makes it a little bit sweet.”
It’s true, we bought a 2-pound Kaua’i-raised chuck at Kojima’s for $8.60. Normally the cut needs long, gentle cooking because it’s tough cut with a lot of flavor. After marinating for about two hours we grilled it, and it was tender and extremely satisfying.
Cristobal received $20,000 after placing first in the 2012 Kaua’i Coffee Agriculture Business Plan Competition. The intensive eight-month process taught her a lot, including that her product is 82.67 percent Hawaii sourced.

A 3,200-square-foot retail location is being built in Hanapepe near Da Imu Hut. The facility will include a commercial kitchen, which also will serve as a county incubator kitchen. Small businesses needing kitchen space will be able to rent kitchen time and storage from Cristobal.
“It just so happens that our exhaust hood for our skillets and smokers cost $19,768,” says Cristobal, who planned to open her shop last month. “Everything is in place. We are just waiting for the permits to go through. Once that is done, we’ll open fairly quickly.”
For now, you can get Salty Wahine Gourmet Hawaiian Sea Salt at the Kauai’ Community Market every Saturday at Kaua’i Community College, as well as the Wednesday Kaua’i Culinary Market at The Shops at Kukui’ula in Po’ipu.

Her seasonal Hawaiian Turkey Brine Seasoning will make any Thanksgiving turkey flavorful and moist. Combine the seasoning with water, and give the turkey a 24-hour bath.
Once cooked, you’ll have a perfectly golden, tender and juicy turkey to present.
On Dec. 19 at the Kauai Culinary Market, Cristobal will demonstrate how to make a Christmas dinner. She will prepare a holiday ham with a Monkeypod Jam glaze, as well as corn on the cob with Hawaiian Rub, a potato medley with purple, yellow and orange sweet potatoes, sweet onions and red potatoes, and coleslaw with local cabbage and carrots. The great thing about these cooking demonstrations is you get to eat what’s made!