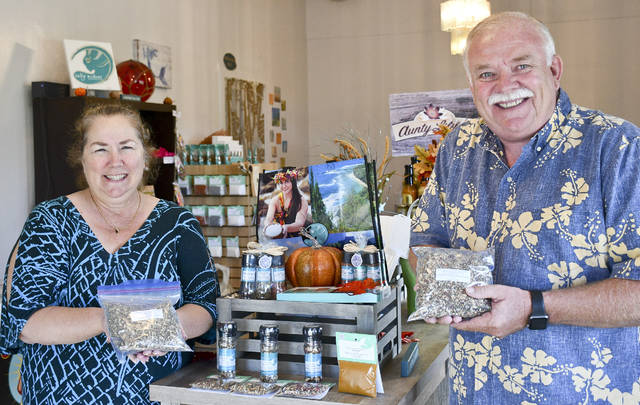 HANAPEPE — Laura Cristobal Andersland was thrilled when informed that the Salty Wahine Gourmet Hawaiian Sea Salt’s Hawaiian Rub was a gold medalist at the Scovie Awards, the world’s most competitive fiery foods contest.
“This was my first invention when I was 11 years old,” Cristobal Andersland said. “I’ve entered it before, but it never earned a gold.”
The Hawaiian Rub earned gold in the Cook It Up, Dry Rub/Seasoning – All Purpose category after being applauded for its “great flavor” by judges in a release, Monday.

Salty Wahine Gourmet Hawaiian Sea Salts also garnered a silver medal in the Condiments-Hot &Spicy, and a bronze medal in the Meat Required, Dry Rub/Seasoning All Purpose category for its Island Volcano Seasoning, a product created by Laura’s son Sean.
“He wants to be better than his mother,” Cristobal Andersland said. “The Island Volcano is a new product which we will be introducing to our other markets very shortly. The judges liked its ‘wonderful blend of spices, beautiful colors, nice aroma, and texture.’”
Salty Wahine also earned bronze medals for its Island Curry in the Meat Required, Unique category for its “great flavor” and “very smooth even flavor.”
“This is something customers have been asking for,” Cristobal Andersland said. “We listened to what they wanted and Sean came up with the product.”

Judges at the Scovie awards also awarded the Passion Fruit, Orange, Guava Pepper with a bronze medal, describing the salt-free product as “just wonderful.”
A bronze medal in the Marketing and Advertising, Website category rounded out the awards for the 2018 Scovie Awards for the Kauai firms.
“This is thrilling,” Cristobal Andersland said. “We submitted seven items for consideration, and six won awards. We found out that this competition is international with entries coming from different countries around the world, and that makes earning awards even more exciting. We have products on our island which would be very competitive at this judging, and I would love to see more people consider submitting their products for consideration.

Dave DeWitt, founder of the Scovie (short for ‘scovel,’ a measure of heat in foods) Awards and the National Fiery Foods and Barbecue Show, said there were 121 total companies representing 31 states and six countries, including the United States, Canada, New Zealand, United Kingdom, Austria, Switzerland, and Australia, entering the 2018 competition. Of these, 89 won at least one award.