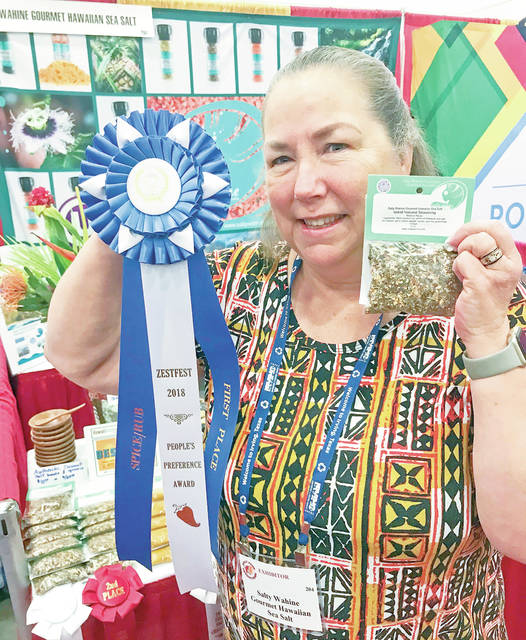 The Salty Wahine Island Volcano Seasoning is described as a spicy all-purpose rub, used on chicken, steak, and fish, and produced in the Salty Wahine Gourmet Hawaiian Salt facilities in Hanapepe.
Island Volcano is one of six Salty Wahine salts that earned a total of six awards, including two first places, when awards from the Fiery Food Challenge were announced on Jan. 26 in Irving, Texas.
“Salty Wahine made a huge splash at the Fiery Food Challenge with our first entry into this prestigious event,” said Laura Cristobal Andersland. “Island Volcano Seasoning won the People’s Choice Award during the blind taste testing by people attending the event. I can’t believe we beat all these Texas barbeque rubs. It is nice to know that Kauai products can compete internationally, and hold our own.”

The award-winning seasonings and rubs are available in different sizes at the Salty Wahine Gourmet Hawaiian Salt facility in Hanapepe, select retail stores around the Islands, and at the two Kauai County Farm Bureau partnership farmers market, including the Wednesday Kauai Culinary Market at The Shops at Kukuiula, and the Saturday Kauai Community Markert at the Kauai Community College.