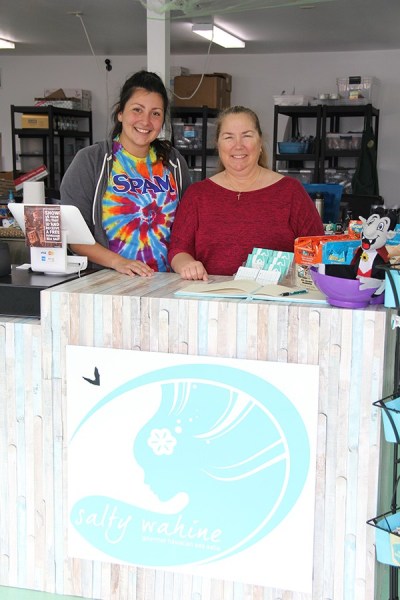 For Kauai
By Léo Azambuja 2016

Salty Wahine owner Laura Cristobal-Andersland, right, and Jessika Montoya, executive administrator for the business — and also Laura’s future daughter-in-law.
As a child, Laura Cristobal Andersland liked to create salt rubs. She grew up and made a career in the hospitality industry. Meanwhile, she still kept making salt rubs. After retiring in 2008 from her job of 30 years, she started selling her salts, branded Salty Wahine, at farmers markets to help put her kids through college.

But calling what happened next a retirement is a total misstatement. Her special salts became exceptionally popular, and the demand grew exponentially. By 2013, Salty Wahine moved into a retail space in Hanapepe, a sleepy Westside town which is home of the last place in Hawai‘i where salt is harvested the same way it was centuries ago.

“We do a line of Hawaiian salts and seasonings,” Laura said. “We specialize in fruit infusions, se we take the local fruits such as guavas, pineapples, passion fruit, lychee.”
Cooking with fruit, she said, is good because it tenderizes the meat. So the logical step for her was to create something different, to infuse the salt with those tropical fruits.
“It creates these beautiful salt crystals that look great, smell great, taste great and they do wonderful things for your food,” Laura said. “It just contributes to our motto of making eating healthy fun. It’s just a really fun line, everybody likes to cook with it.”

Today, Salty Wahine sells dozens of salt rubs and flavored sugars, with the majority of the ingredients being from Hawai‘i.
The three basic Hawaiian salts they offer are black lava, ‘alaea and sea salt.

“The black lava salt, which we hold a trademark on, is good for people with acid reflux or digestive issues,” said Laura, explaining the charcoals infused in the salt crystals absorb stomach acid.
“That’s why the chefs really love Hawaiian salts,” she said. “They don’t just flavor your food, there’s actually medicinal values to them.” Despite key healthy minerals, original black lava salt found in the wild has a lot of impurities such as sulfur, which can be harmful to humans. “We actually have to make it,” Laura said of black lava salt. “I had to figure out a way to make black salt.” Many companies use coconut charcoal to create black lava salt, but Laura said she went a step higher by using the higher-grade bamboo charcoal, which also has medicinal purposes.
The red ‘alae salt packs a lot of minerals from the red volcanic clay that gives it its color. In any given batch, you can have between 60 and 81 trace minerals, according to Laura. It’s also lower in sodium than other sea salts, so it is highly ranked in the world.

The sea salt is harvested 2,000 feet underwater, and it is processed as pure as it can be, without even touching the air.
Over its short existence, Salty Wahine has netted numerous accolades, including one of Hawai‘i’s 50 Fastest Growing Companies in 2016, Kaua‘i Filipino Chamber of Commerce’s Entrepreneur of the Year in 2016, Retail Merchants Hawai‘i’s 2016 Retail Business of the Year and Fastest Growing Business of the Year, SBA 2012 Small Business Exporter of the Year, Pacific Edge’s 2015 Best Family-Run Business finalist, state and county government certificates, and many others.

The business was also featured in general and trade publications over the years. Laura said she has been grooming her son, Sean, and his fiancée, Jessika, to take over the business, so she and her husband, David, can concentrate more on marketing. If that happens, the business will be in good hands. Laura said her son came up with “some really out-of-the-box” recipes that are just superb. He created custom blends for Disney Resort, the Courtyard Marriott, and other businesses. “Salty Wahine will live on,” she said, with a smile stamped on her face.