Salty Wahine
We heard legends…first of the amazing salts found in Hawaii, so treasured that you knew if someone gifted you island salt, you were special to them, and second, of a somewhat salty woman who had taken on salt and never looked back.
And then we met her. Laura was a single mom who left the travel industry and created a family business.  That business, after only a decade, has become a big part of why Hawaiian salt has gained such a stunning reputation. Her secret—and she holds it tightly—is the ability to infuse salt (and now sugar, too) with some of the flavors of the islands. 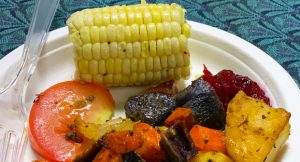 She calls herself the product of “two amazing grandmothers.” She says, “My older sister and I used to cook with them every chance we got. My job was to put the fork marks in the peanut butter cookies. I was learning about flavors at a very young age.”
She developed her first flavor rub at age 11, and relates, “My mom said, ‘You are cooking dinner from now on!’” Years later, Laura and her son entered and won their first food competition, and the business now employs a total of nine, including her son, daughter, and their spouses. 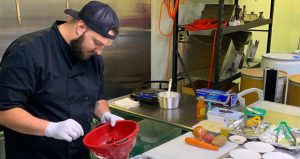 Chef Thomas, who practically grew up with the Salty Wahine family, demonstrates how to best use the various flavors.

The cranberry dish had Passionfruit Chili Pepper salt; the corn used a Guava Garlic salt, and the potatoes were heavily and deliciously flavored with the house Hawaiian rub. Of course, we bought them all to literally bring back the flavors of Hawaii, and added a little Black Lava salt purely for its potential medicinal value (the charcoal is said to reduce acid). In fact, salt in general is said to filter toxins, provide a umami flavor, and offer healing properties for everything from tooth infections to muscle balance.

While eating, we learned more—although we still couldn’t pry the proprietary secret of the infusion out of either Laura or Chef Thomas. We learned that sea salt is 90 percent water, making “each crystal amazing.” We learned that it’s OK to heavily season foods, because “the more flavor, the better.” And we learned that roasting corn with either the Guava Garlic or the Hawaiian rub, with a little butter and olive oil, is even easier than seen on TV, and way better than traditional boiled corn. Way, way better.

While Salty Wahine has, in many ways, been at the front of the pack in international awareness, Laura is passionate about bringing more of the industry to Kaua’i. “At least six companies here have won international product awards,” she says, with pride. “There is so much talent here on Kaua’i with food.”